Every day he more closely resembles a dirty basketball.

Trump is the Antichrist and the End Times are upon us.  If you believe that kind of thing.  A lot of folks do, apparently. And a recent Pew poll suggested over 60% of white evangelicals believe the second coming of the Messiah will happen before 2050, and the Antichrist is already here. A large portion of these True Believers have wormed their way into Trump’s cabinet.  Remember the kerfuffle when the video of Mike Pompeo surfaced in 2015 after the Supreme Court legalized same-sex marriage?  An Opus Dei Catholic like William Barr, he was outraged at the Court: ” “We will continue to fight these battles. It is a never-ending struggle. … until the Rapture.”  Rick Perry belongs to the New Apostolic Reformation megachurch In Texas, they engage in elaborate ceremonies involving branding irons, plumb lines and stakes inscribed with biblical passages driven into the earth of every Texas county.  Like Pompeo, Christian “dominion” over government is the goal.

Adding fuel to the tent-revival-bonfire, the recent killing of Solemani also has significance to the Rapture Right, hearkening to the prophesy of “Gog and Magog” and Iran, once Persia.  But the biggest tell was the full-throttle embrace of Israel, even moving the US embassy to Jerusalem, a dog-whistle to the snake-handlers that the Apocalypse is right around the corner. Trump’s disdain for NATO, the Paris Accords, the UN, is angelic music to the ears of the Christian Dominionists who want the Creation story of Genesis taught alongside (or instead of) The Origin of Species.  When One World government emerges, all hell’s gonna break loose

Trump was doing a great impersonation of the Antichrist at the national prayer breakfast by waiving around newspapers with “TRUMP EXONERATED” headlines, claiming that senator Mitt Romney broke his oath to God, using his faith to do “something he knows is wrong.”  With Nancy Pelosi at the table, he then stated he didn’t like people who use their religion to claim they pray for you when they don’t pray at all.  Individual-1 repeated this performance for an bigger audience at noon, when he thanked the assembled “warriors” in Congress for their role in the cover-up.  They stood and clapped and cheered when he called the Speaker of the House a horrible person who lies about praying.  And again when he accused their former standard-bearer and Mormon Deacon of using his faith as a “crutch.”  Trump called the FBI scum and sleazebags to laughs and claps. The applause was long, strong, and loud at the 1.5 hour televised revengefest. Sounded like the death-rattle of the Democracy.

Irony is dead.  To quote Joe Scarborough, irony has been hung by the neck, then dragged through the graveyard of stupidity, hitting every single headstone.   one of these alleged Christians is guilty of lying to their God.  Each one of these MAGA-mind cult followers stood with their hand on a Bible before Chief Justice Roberts, swearing an oath to be impartial, unbiased, neutral arbiters of Justice in the Senate Impeachment trial.  You can serve God, or Trump – not both. 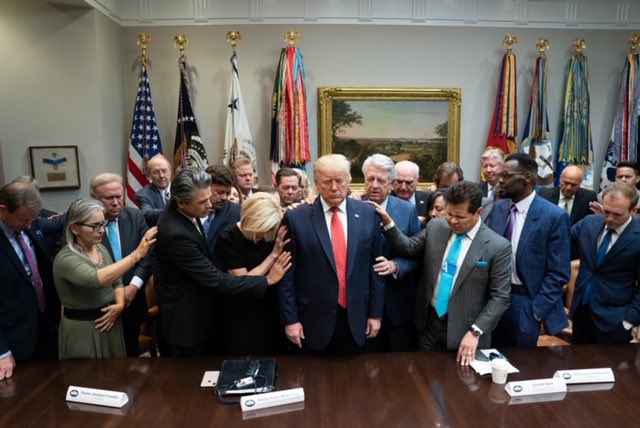 In the wide, wonderful world of podcasts, you have many options.  Your values are reflected in what you value, and we are honored to have you support us. Thanks for keeping it lit!